Choreographing is dreaming with my eyes open...

​​
The place where I feel most home, is the place where I can share and create with others, where art unites people and allows us to be different, a place where our uniqueness is embraced. What I love about dance, is that it can speak the unspoken. To choreograph for me is like dreaming with my eyes open.

IN SHORT:
Wubkje Kuindersma is a Freelance Choreographer and Young Creative Associate at Dutch National Ballet.
She graduated at the Rotterdam Dance Academy in 1998 and danced with Nürnberg Ballet, Djazzex, Gulbenkian Ballet, McGregor's Random Dance, Danish Dance Theatre, and in several freelance productions.
Kuindersma won during her education in 1997 a scholarship in the national ballet competition of Dansersfonds.
In 1998 she received still as student a nomination for The Philip Morris Award for outstanding performance in the ITS Festival in Amsterdam.
Her first choreography Aquasomnia (2009) won an award for originality of movement vocabulary and outstanding movement quality in the choreographic competition U30 in Cologne in 2010.
In 2016 she received the BNG Bank Dance Award for Excellent Choreography Talent - for her work Doubleyou, which premiered at Korzo&NDT in November 2015.

Critic's Choice Dance Europe mentioned Kuindersma's "Anatomy of Light" amongst "best premieres" alongside works of Beaujean, Van Schaijk, Goecke and Clug in Ocober 2022.
Dancemagazine USA included her in their “Top 25 to watch list for 2019”  an annual list of the dancers, choreographers and companies that are on the verge of skyrocketing and dancemagazine believes represent the future of our field.
The Center for Ballet and the Arts at New York University and Dutch National Ballet nominated Kuindersma to serve as an Artistic Partnership Initiative Fellow in Summer of 2018.
In May 2019 Kuindersma was nominated for the Dutch Dance Award “Nederlandse Dansdagen Maastricht”   in the Netherlands, a prestigious award supporting emerging talent.

Her duet Two and Only for Dutch National Ballet has been internationally acclaimed. Marijn Rademaker got nominated for the Prix de Benois 2018 for his role in this duet.  He performed it together with Timothy van Poucke on the Benois Gala at the Bolshoi Theatre in Moscow in June 2018.
Kuindersma’s Tales of A Nordic Mind  for Danish Dance Theatre delivered dancer Csongor Szabo a nomination as Best Dancer for the prestigious Danish Reumert Award in 2018.
​
Her "Architecture of Hope", a co-production with West Australian Ballet and Dutch National ballet, was awarded the Performing Arts West Australian Award Best New Work in June 2020.  It premiered 7th February 2020 in Perth (WA).

Human connection is an important theme in her work.
Her choreographic style embraces modern dance and modern ballet, merged with personal, theatrical and filmic elements.  Her works have been described as poetic, existential, sensitive, dynamic and musical a.o.
Music plays a vital role in her choreographies, it inspires and moves her.
She loves to get creative with other art forms, such as theater, film, live music, composers, visual art, literature, photography, animation, virtual reality, dj, opera, science a.o .
She honours the talent and role of the dancers by fully engaging them into her work.
​
​upcoming new works:
Theater Kiel
Another Kind of Blue
​Dutch National Ballet Junior Company
Skånes Dansteater
West Australian Ballet
​Dutch National Ballet
a.o
​
contact: wubkje@gmail.com
videos: vimeo.com/wubkje 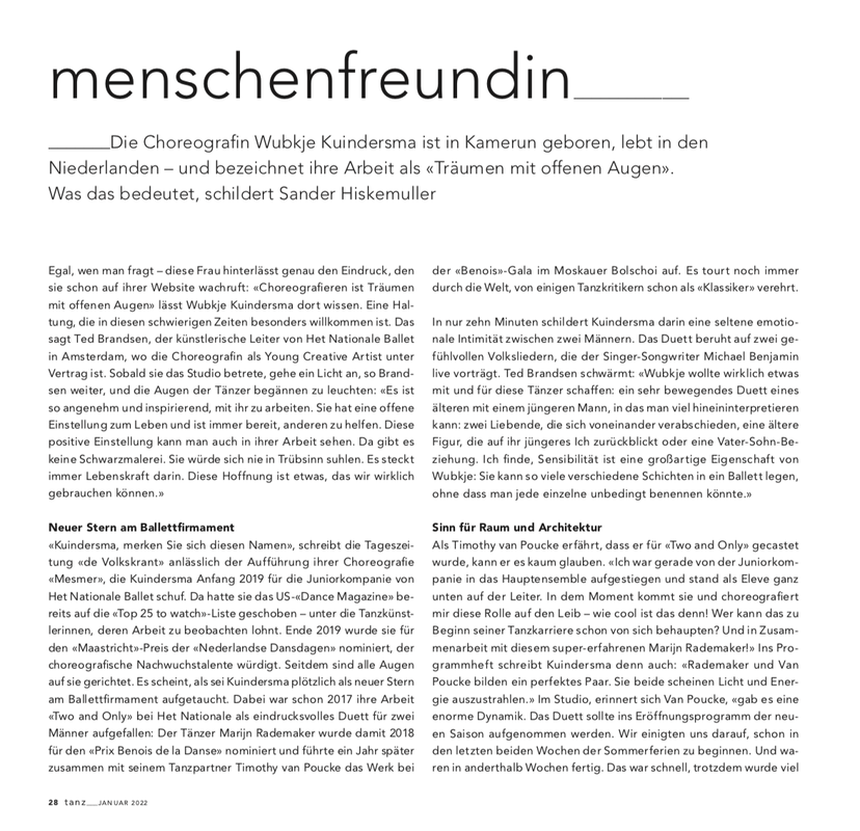 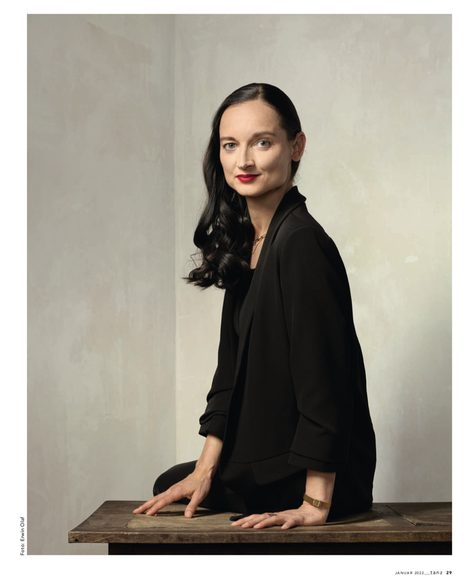 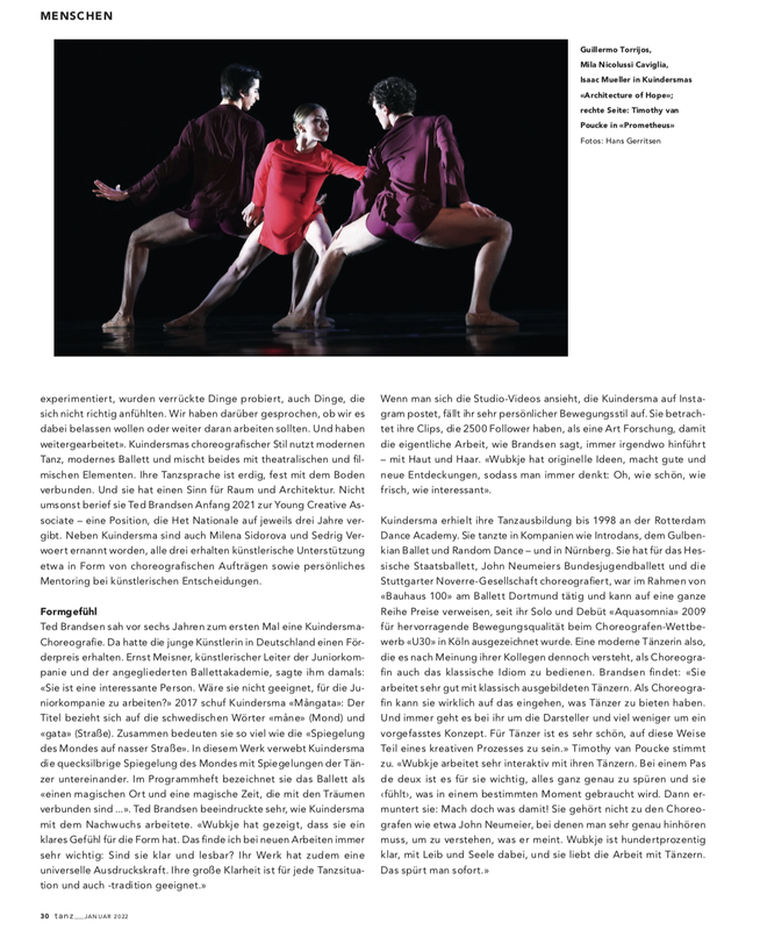 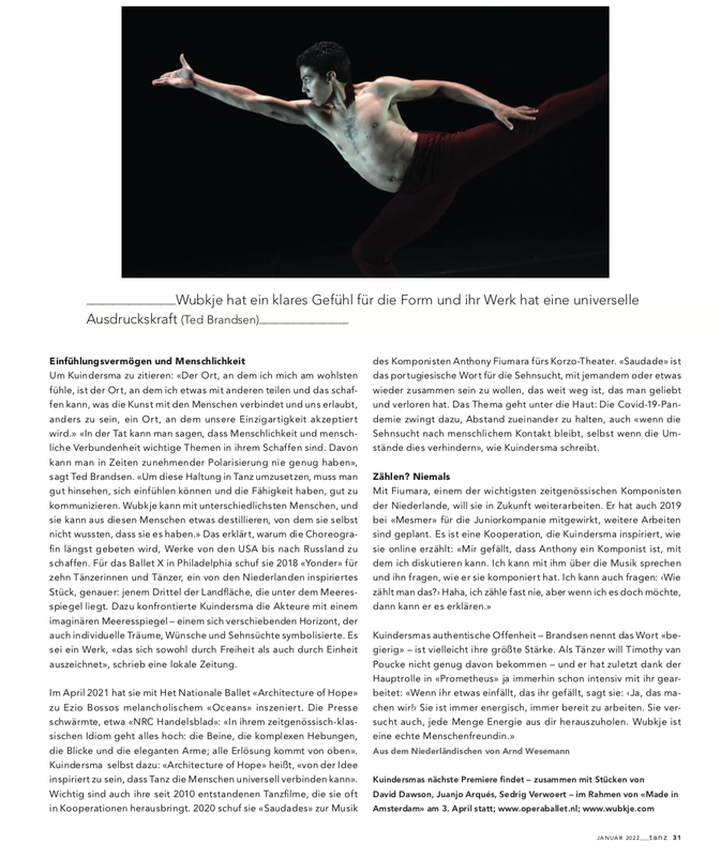 ¨... Earlier, a new name to watch, Wubkje Kuindersma, made a splash with Two and Only, set to songs by Michael Benjamin. Musical and never sappy, this duet for two men, Marijn Rademaker and Timothy van Poucke, portrayed emotional intimacy with a light touch. The piece held its own next to a wry, tongue- in-cheek pas de deux by Dutch master Hans van Manen, Déjà vu — no small achievement for Kuindersma. ¨
Laura Cappelle - Financial Times
​¨...Wubkje Kuindersma had the tough challenge of presenting her new work alongside a classic by Hans van Manen, which she did in style with Two and Only, a male duet pairing Rademaker, an experienced lead soloist, with apprentice dancer Timothy van Poucke. Kuidersma's ¨double¨was singer-songwriter Michael Benjamin, who performed two songs live on stage, accompanying himself on guitar for ¨Long Overdue¨and on piano in ¨From Blue to Red¨. Making no attempt to interpret the lyrics, Kuindersma nonetheless kept up an absorbing emotional momentum through her choreography, which was sentimental without being mawkish, and immutable without being banal. Here was a new choreographer of which to take note.¨
Graham Watts - Dancing Times​

¨...Two and Only by Wubkje Kuindersma is the most affectionate work of evening. She created the piece especially for soloist Marijn Rademaker and élève Timothy van Poucke, an interesting partnership between a young dancer who is just starting his career and an experienced dancer who is at the top. The work is about universal love and the perishability of it. The duet between the two man combines power and masculinity with tenderness, and there is a sense of warmth and pain at the same time. Perhaps it is a memory of a relationship that once was. Singer and songwriter Michael Benjamin performs his touching songs live with the dancers on stage, adding to the intimate atmosphere.¨
Isabella Zijp - Bachtrack 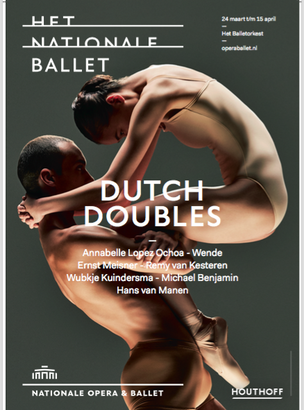