TALES OF A NORDIC MIND 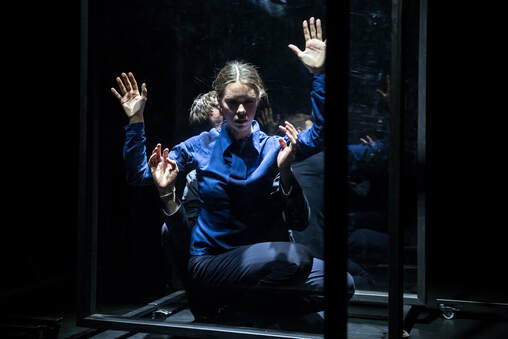 ​¨...Tales of a Nordic Mind, is a power performance in Nordic melancholy and aesthetics. The work has found inspiration in the Nordic stories, but for me it is the theme that most clearly shines through, longing. Among other things a longing for direct human contact, which is often lost in the modern technological world, where a large part of our communication takes place through screens and glass. It is clearly visualised as the dancers in the work attempt to communicate with each other, but all the time at a distance or with physical glass panes between them. It is unproblemably difficult for them to reach each other, and if that leads to the idea of modern communication or to the fact that in the actual physical contact it can be difficult to reach their fellow human beings,  is equally good.
It's just beautiful and melancholic! The music is incredibly well-chosen and the dancers seem to be a perfect visualization of the delicate cello that plays under them: dancing with an intense crowd, yet it has an impressive fragility, making Tales of a nordic mind a very straightforward aesthetic experience.¨  (translated from danish)
Line Kirsten Nikolajsen - den 4.vaeg


¨...The evening begins with a world premiere of Dutch Wubkje Kuindersma who danced in the past  in Danish Dance Theater. Her work is called Tales of a Nordic Mind. Circling among people who seek and seek, the work also imparts a longing for love and relationship between people. Great formations and emotional solos...¨ (translated from danish)
Per Ludsgaard - XQ28

¨....The evening's performance is divided into three parts. During the evening we get closer and closer to each other. In fact, we will be closest to ourselves. First, we will be taken into TALES OF A NORDIC MIND and seduced by the cold wind and the dark tones. A man in dark blue suits draws us in, and characters shine behind plexiglas windows. Shadows are becoming human beings. The glass reflects our distance to each other and to the world. It's about longing. It's about love. People are related to people.

Okay. I can as well say it as it is: I'm simply just a sucker for synchronous choreography. It is simply incredible to look at, and my brain always burns a little together. How can it be done at all? That people melt together, but still preserve themselves? Here the human body becomes both prose and instrument....¨ (translated from danish)
Anna Cæcilie Sørensen - Scenekanten

¨...The end, on the other hand, sat straight in the eye. We see here two individuals who, like in Pink Floyd's "The Wall", fight a brave battle to break out of the "wall" around them. On stage, Merete Hersvik and Csongor Szabó are surrounded by the mirrors and in an elegant duet they dance out of them...¨(translated from danish)
Ea Melissa Christiansen - Ung Teaterblad 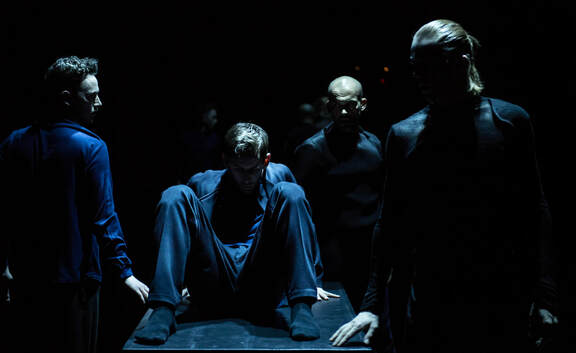 ¨…I’m crazy about Wubkje Kuindersma, both as a dancer in ¨Labyrinth¨ in her time and as a choreographer for the work Mahl3 with dancers from the National Youth Ballet of Germany, which was shown at Copenhagen Summer Dance in 2016. All the dancers of Tales of a Nordic mind are amazing, and Hungarian Csongor, martyred by loneliness or longing, is alone turning on, over, above and below a table, crossing his arms and hiding his face behind scattered fingers, makes me think of the DV8 Physical Theater.

"Reflecting, mirroring transparency¨
Large man-made wheel windows make up the scene in Wubkje Kuindersmas Tales of a Nordic Mind. The seven dancers use them in the most refined way. They work both as visual compositions and as elegant metaphor for the Nordic landscape with lakes, ice and frost and the Nordic mood, where we chased behind layers of glass long for proximity and love but may never come in behind the cool facade - or get real proximity through the monitors we are hiding behind on social media.

The dancers are protected through layers of glass, and they communicate through the glass with movements that are sometimes pretty pantomime-like. But where in pantomime you could manage without the big windows and illuminate them with the palms of the air, here the windows have a visual function where the dancers can touch the glass, push the face to the window, move around the window and are reflected in the glass .

Caress and kisses
The music is varied and sometimes dramatic, and the Nordic composers like Jóhann Jóhannsson contribute to creating the Nordic landscape and the atmosphere that can only be captured on film. There are countless nice scenes. For example, one where all the dancers are in line behind each of their ruins and Csongor Szabó, who faces them, synchronously controls all their movements behind the glass. What I'm taking home is the many elongated, beautiful or intense and agitated movements, the vulnerability of the dancers when they are on their heads and the clothes slide down to see only skin, touches that create domino effects and the deep cello, when two eventually find each other and exchange caresses and kisses …¨(translated from danish)
Iben Maria Hammer -  Dans Terpsichore

¨The first ballet ¨Tales of A Nordic Mind¨ has its starting point in the Nordic myths and narratives, with center point the concept of missing/longing. The one moment is focused on presence, a split second after the opposite, the taking of distance. Glorious dance in Dutch Wubkje Kuindersma's smooth choreography. (translated from danish)
Lars Wallenberg  - Børsen 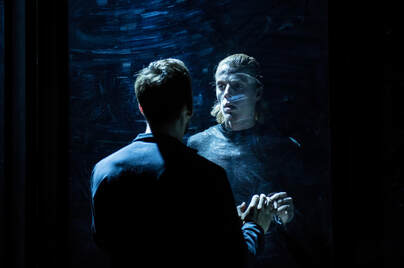 ¨..Parallel to the present
Both dance performances last about 40 minutes and have a good contrast to each other. Tales Of a Nordic Mind is a melancholy dance in a simple spectacle of glass plates that plays a role in the beautiful images - here the dancers can both mirror and act as smaller characters in another layer as they move behind the glass plates - and let one solo dancer or duet tell a story in the foreground.
Several places in the process all eight dancers hide behind the glass plates. Inevitably, parallels are drawn to the present, where a large part of modern people's interaction with each other takes place behind the screen. The Slovenian dancer Jernej Bizjak has a strong part where he turns his body on and around a table, and the company avoids the synchronous and plays on uniform but displaced movements. It was not always that these were right in the eye. Is it supposed to reflect on the obvious differences in the timing? The choreography in any case, speaks to the feelings, and accompanied by string music in mol, there is lots of space for after-thoughts ¨ (translated from danish)
Hans Christian Davidsen - Kulturkapellet