Architecture of Hope is a co-production with Dutch National Ballet. 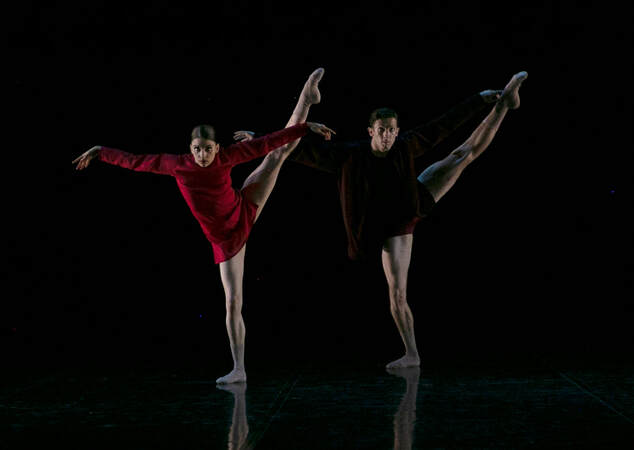 ..."Architecture of Hope, the second piece of the evening, was a co-production with Dutch National Opera and Ballet. Now this was a showstopper. Wubkje Kuindesma is an emerging choreographer who is already highly lauded, and after getting teary-eyed at the sheer beauty of Architecture and Hope, I will be another watching her career with keen interest.
​
The first two pairs, Carina Roberts and Jesse Homes, and Dayana Hardy Acuna and Juan Carlos Osma, were particularly mesmerising, and their talent and technique shone through in this magnificently crafted piece beautifully. This is what contemporary dance is all about. Rich in intensity, style and perfectly executed moves, this was far and away the highlight of the evening." ...

​
"...Likewise, Architecture of Hope is a dreamy, beautiful work, choreographed by Wubkje Kuindersma, who also designed the stunning costumes. Principals Dayana Hardy Acuna and Juan Carlos Osma truly owned the stage with their breathtaking connection – both with each other and to the audience as well. To convey such emotion and feeling through choreography is a skill that not many possess, and at times I unexpectedly felt myself tearing up. The audience was truly drawn into the mesmerising dancers’ journey throughout this work, and I can see why Kuindersma has been listed in Dance Magazine’s ‘Top 25 to watch in 2019’..."

​
..."After interval, the mood remains relatively sombre in Architecture of Hope, a work for eight dancers created for this season by Dutch rising star Wubkje Kuindersma and set to the rhythmic and driving patterns of Ezio Bosso’s Symphony No. 1 (Oceans) – Movement 1 and 4.
From the sculptural opening female solo into a pas de deux that slices sharply through the space (performed with precision by Carina Roberts and Jesse Homes), there’s a sense of tight choreographic control in this work. Another duet follows. With gentle gestures and undulating arabesque lines, it’s softer but no less athletic; performed in this casting by Dayana Hardy Acuña and Juan Carlos Osma with their trademark dynamism.
Transitions – from ensemble, to multiple duets in unison, to featured pas de deux – are almost imperceptible. The work is dynamic, canons of arching lifts and soaring jetés are uplifting to watch. Contrasting the deep burgundies worn by the men, the women shoot filaments of red through one ensemble scene. It’s invigorating."...

..."After a short interval, Wubkje Kuindersma’s Architecture of Hope follows. Taking inspiration from her belief that “choreography creates a space in which human connection is established – not only between the dancers themselves but also between the dancers and the audience,” Kuindersma also found musical inspiration in the first and fourth movements of Ezio Bosso’s Symphony No. 1 Oceans and the concept that hope “comes in waves, like the waves of the ocean, reflecting human nature.” The eight dancers enter carrying small, lit candle-lanterns (beacons of hope), and Kuindersma also designed their red (women) and maroon (men) lycra costumes.

..."Perhaps featured more within the second performance, Ballet in the Quarry truly presented the strength of light and shadow in Architecture of Hope.
The lead dancers, Juan Carlos Osma and Dayanna Hardy Acuña, were mesmerising to watch in this sensual adaption of love, sexuality, aggression, and lust – allowing for the lighting techniques to flourish, amplifying the atmosphere under the full moon.
Their chemistry was divine, representing Adonis and Aphrodite on the night stage, caught in a ferocious battle of love. Movements were more fluid, and assured, predominantly following classical techniques. The interconnection of prop candles, catching the lighting provided by technicians, caused sparks of romance across the audience – couples reached out to each other, proving that this art form continues to inspire.
“Choreography creates a space in which human connection is established – not only between dancers themselves, but also between the dances and the audience.” said Wubkje Kuindersma, Choreographer and Costume Designer."...

....‘Architecture of Hope’ was the next routine on the cards and this was the world premier of this work from dynamic Dutch choreographer Wubkje Kuindersma who, and I quote ‘Dance Magazine included in their “Top 25 to watch in 2019”, the annual list of up and-coming artists whom they believe represent the future of dance.’

I felt a strong link to this routine, the passion on display through this one actually made me feel a little bit sad. I don’t really know why, but that’s the emotion it evoked from yours truly. There are times where the WA Ballet just makes me feel a certain way. Why did I feel sad? I don’t know. It was a good sad though, do you get what I mean? I just think sometimes these performances are so open to interpretation, you can feel happiness and joy, or sadness and sorrow at any time. It really was a lovely routine despite my melancholy demeanor!"...

​
..."The second work; Architecture of Hope was a world premiere from Dutch choreographer Wubkje Kuindersma. Through this piece Wubkje hoped to establish a connection between the dancers and the audience. Frankly the dancing from Dayana Hardy Acuna and Juan Carlos Osma was so mesmerising that I couldn’t take my eyes off them. No disrespect to the other dancers but Dayana and Juan stole this show – they were sensual and absolutely perfect with their technique."...

..."After a short interval we had the pleasure of viewing the world premiere of ‘Architecture of Hope’ by Dutch choreographer Wubkje Kuindersma. The performance resonated themes of human relationships and connection, with eight dancers dressed in red and burgundy loose-fitting shirts – a look that feels casual and intimate and wouldn’t be out of place in bedrooms and lounge rooms at home. For me the highlight was a moment where the women performed in pairs in a canon, with one pair performing the same choreography as the previous pair with a slight delay of a few bars of music. The visual echo was a stunning effect and exciting to follow.

​Of this work Kuindersma stated ‘Choreography creates a space in which human connection is established – not only between the dancers themselves but also between the dancers and the audience.” There were many gorgeous moments of intimacy and tension between the pairs of dancers and it felt an honour to be sharing the quarry with them for this world premiere performance."... 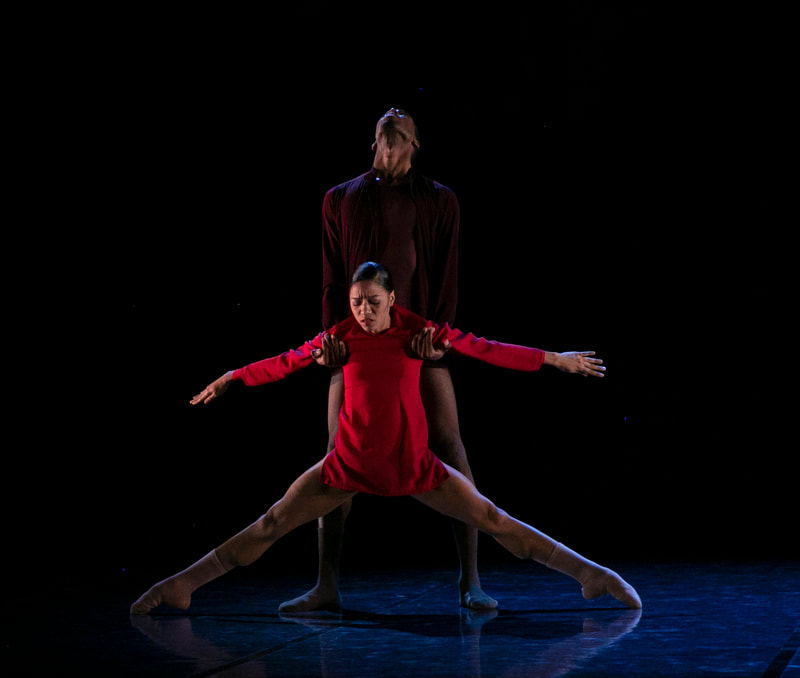 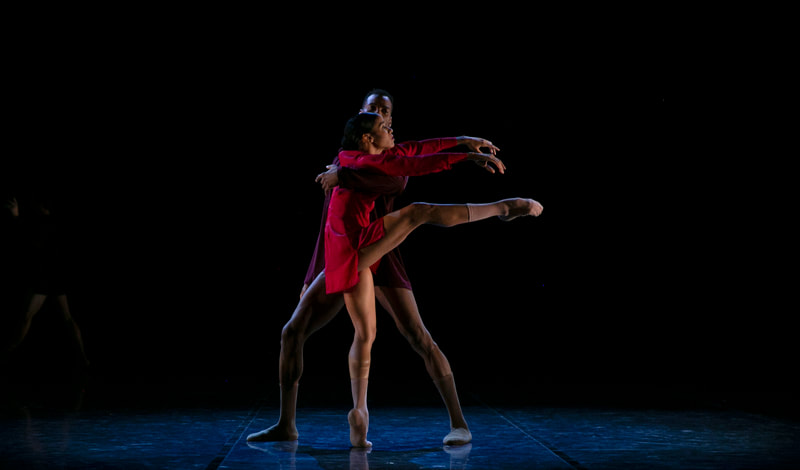 reviews on reprise on gala of wab

"...The next two excerpts were arguably the most conceptually fascinating of the night. Created by Wubkje Kuindersma for West Australian Ballet earlier this year, Architecture of Hope began with an unforgettable image of bleakness and hope as each of the dancers carried a glowing candle into the darkness. Dayana Hardy Acuna’s stirring emotional performance was a stand-out on opening night...."
ISABELLE LECLEZIO - DANCE AUSTRALIA, 24 November 2020
"....The final modern piece, Excerpts from Architecture of Hope, with music performed by the Orchestra Filharmonica ‘900 del teatro Regio of Turin, had its world premiere in Perth’s beautiful Quarry setting earlier in the year. The candle lit lanterns would possibly have been more effective under that dark sky, but the performances of the eight dancers, so markedly different in stature, small women in red, tall men in burgundy, were superb. Interacting slowly and meticulously, like embracing snakes, every challenging, demanding movement, arabesque, jeté or overhead lift, made you hold your breath.
It is clear why Dayana Hardy Acuna and Juan Carlos Osma, Carina Roberts and Jesse Homes, had been chosen for the Pas de Deux. They were magnificent and for Choreographer, Wubkje Kuindersma, it was a triumph...."
BARBARA BOOTH - ARTS HUB, 23 November 2020

"...The mood continues sombre in the aforementioned second Gatsby pas de deux, into excerpts from Wubkje Kuindersma’s Architecture of Hope, which premiered earlier this year. Though this contemporary work was created pre-pandemic, the poignant, elongated chords of Ezio Bosso’s “Adagio (White Ocean Antarctic)” and the pockets of candlelight made me wonder if Kuindersma had a premonition of what was to come. Her sculptural solos, duets and trios were beautifully performed by the opening night cast of eight..."
NINA LEVY - SEESAW, 20 November 2020
​".. there was a stunningly beautiful piece Architecture of Hope which saw the dancers performing with candles. This work was performed during the 2020 Quarry season but here audiences got another chance to see it. The costumes in various shades of red, dark lighting, and intricate choreography made a perfect combination..."
Graeme Watson - OUT IN PERTH, 21 November 2020
Proudly powered by Weebly